The Faith of Douglass John Hall: Waiting for Gospel 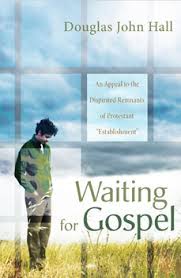 “I have heard it, here and there, in unexpected places, and often in times when I had grown jaded or dejected and looked only for the commonplace. And if I had not heard it, and heard it again and again and again, I would certainly not have become – and remained –what I gladly confess I am: a Christian. The imperatives of the activists might have pricked my conscious or inspired periodic outbursts of well-doing. Good liturgy, pageantry and music would have sent me to church occasionally –especially during the high festival seasons. Personal and family occasions – the rites of passage – would likely have ensured that I would not have turned my back completely on this faith of my fathers and mothers. Along with almost the majority of my fellow citizens, I’d probably have told the census takers, decade after decade, that I was a Christian and a Protestant. But none of these conventions and affiliations would have kept me Christian in anything but name. Only gospel could do that. Only the faith that ‘comes by hearing’ (Romans 10:17) has made me a listener to the unique and intriguing story that is told in the continuity of the biblical texts – for me, as for many, past and present, ‘the greatest story ever told,’ because it touches my story and gives me a past and a future that my story, by itself could never produce. For that reason, I cannot join my contemporaries who turn their backs on Christianity and the strange admixture of faith and folly that is called the church. My own faith is mixed with folly too, and worse faults; but in all that I have written and taught I have wanted to remind all who live in some proximity to the Christian movement that the gospel, carried so precariously in this ‘earthen vessel’ (2 Corinthians 4:7) is worthy of the greatest efforts of mind and spirit that human beings can muster. Without gospel, the churches are little more than the insubstantial remnants or rumors of past spiritual forms and preferences, ineffectual and often pathetic ghosts of other ages and generations. As such, their reduction and possible disappearance can cause a certain nostalgia in all of us; but only if they can still appear mow and then bearers of ‘glad tidings and joy’ (Luke 2:10) can their present-day humiliations and losses become the source of deep sorrow – and of the courage to change, still, what can be changed (Reinhold Niebuhr).” (Douglass John Hall, Waiting for Gospel: An Appeal to the Dispirited Remnants of Protestant Establishment.’ [Eugene: Cascade Books, Wipf and Stock Publishers, 2012], Introduction, xxvii-xxviii.)

I thought this was so powerful a witness, I had to share it.

Isn’t that what good news is?