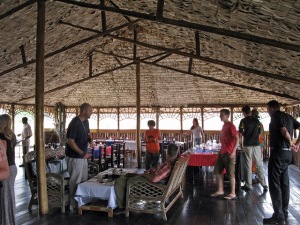 Along with 26 other pilgrims I went to Uganda July 15-29, 2014. One of them is my good friend, J-Jeff Reither who invited me to join his congregation: The Church of St. Anne’s in Hamel, MN on this very special mission trip.

These were my daily reflections:

21 July – Sidelined But Not Out 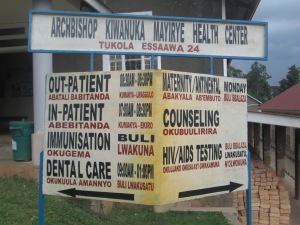 Today was another work day. Since my arm was still hurting me, I decided to go with Emily (from my small group) and Chris to help in the Mayire Health Center for the day (the rest of the group was carrying large stones at the work site at Our Lady of Guadalupe). I had mixed feelings about ‘not working,’ but the decision not to carry those large stones was later confirmed as a good choice by J-Jeff who told me he would have been worried about me the whole time because they were heavy. 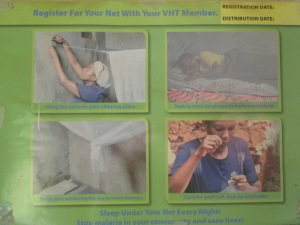 I enjoyed the health clinic. They handle a lot of malaria treatment and deliver somewhere between 20-30 babies per month in addition to hosting an occasional dentist and part-time counselor.  Our day was pretty slow, but a few women came in for prenatal check-ups, and a couple of students came in who were feeling sick. Emily is a pediatric nurse, so it was she who really shined throughout the day. Chris is interested in medicine as a potential career path. Me, being the clumsy mzungu who hurt his arm a couple days ago was interested in the rest of the work this little health center provided for the community. 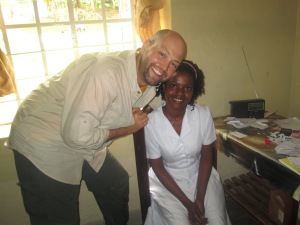 Nurse Angela was our host. She not only showed us around but let us help – showing us how to record the patient’s data, and Emily was invited to participate in the check-ups. Angela is hoping to return to school for a further nursing degree in the next couple of years, and is planning her wedding with her fiancé for once she completes school. 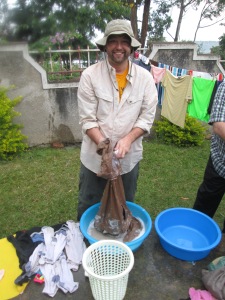 It rained a bit in the afternoon, and the group did laundry out on the patio. It was a good bonding moment. A week ago many of us were strangers, now our group of both men and women were scrubbing their delicates by hand next to each other and laughing. I thought I was particularly good at washing socks! While it was raining, the cloud cover meant no well water, so water was filled in Jerry cans from some other source – I’m not sure where that water came from; while we were doing our laundry the sisters sent some of the workers to retrieve the water for us – nothing comes easy here.

After laundry, a few of us walked through town to a well that runs on solar power. This well provides the water (while it is sunny) for the St. Kizito school up on top of the hill.

Tomorrow we head out for three days to Queen Elizabeth National Park. I’m taking a break to write now while I pack up.

The rain has stopped and the lush green colors are extraordinary.

If there has been a day I’ve been a little homesick it has been today – Mia’s birthday. I hope she had a good day. It is also Sister Monica’s birthday today (she is making Mia a dress). We are going to have a party for her – so at least I’ll still have cake! Happy Birthday Mia. Your Papa loves you.

Today we drove from St. Kizito school to the Hippo Hill lodging area in Queen Elizabeth National Park. We left around 9:30 a.m. with an estimated time of arrival around 5:00 p.m. Our true arrival time was closer to 8:00 p.m. It was a long arduous drive, but not without its merits.

We stopped at the equator for some food, souvenirs, and pictures.

We took brief breaks  at gas stations to buy snacks and use questionable bathrooms. 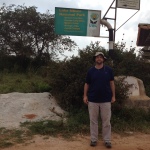 We also took a brief respite at Lake Mburo National Park and saw a herd of zebras. The last hour of our drive was very bumpy and uncomfortable, but we saw our first elephant – so all is forgiven. Tomorrow we take our safari. I’m so excited. 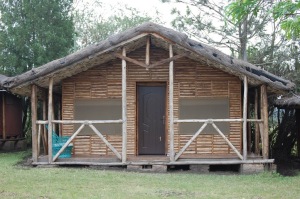 The place where we are staying is very nice. There is a large pavilion where we gathered for dinner, and we have cabins with running water and our own bathrooms!  My roommates are Frank (from my small group) and  J-Jeff. We were told not to go outside at night – the hippos come out and are dangerous. I’ve been humming the Hippo song (from camp) quietly to myself…

In the beginning God made the seas.

God made the forests and the trees.

God made the mountains way up high.

Above it all God placed the sky.

just to show how much God cares.

In between God had lots of fun,

Made a hippo that weighs a ton!

Hip Hip Horray, God made all of us!

Hip Hip Horray, God made all of us!

It is such a silly, goofy song, but I think I’ll still stay inside tonight :).

We woke up a couple times last night hearing some snorting – could it have been the hippos??? 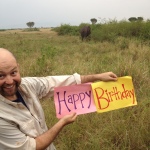 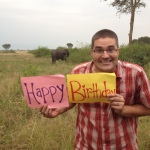 After an early morning wake up of 5:30 a.m. – we ate breakfast and started our safari.    J-Jeff and I got pictures with a happy birthday sign he had taken Sister Monica’s birthday party so we could each take pics with elephants in the background (Mia’s birthday was the 21st, Becca’s was the 22nd). 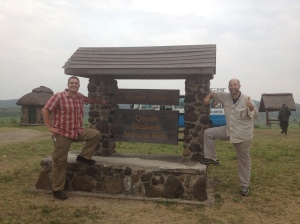 We saw so much in only a few hours: 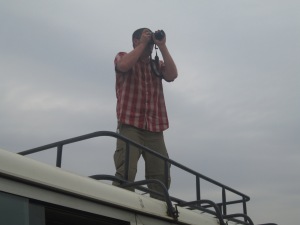 Many kobs and bison and kobs 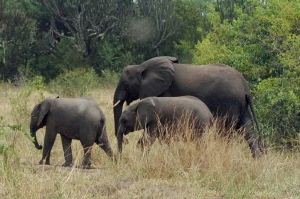 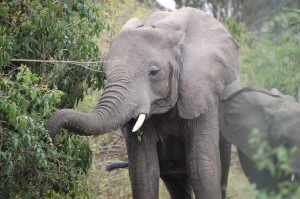 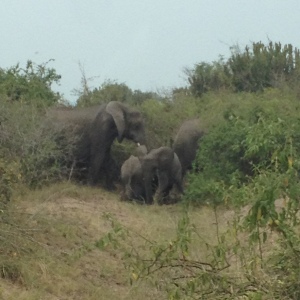 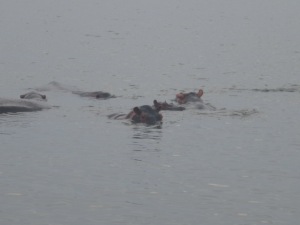 After our return to camp, we had lunch and then a hike down to one of the crater lakes. People could purchase a small plot to harvest the salt from the water. The conditions were horrible. The salt level in the water was so high that it burned the skin, but people had to wade waist seep in it to trudge up the salt from the mud below. Life is a real challenge here.

We had a good small group tonight processing what we had seen – both on safari and at the crater lake. We also started the conversation about what happens when we head back to the United States after all the things we have experienced. Tomorrow is the long drive back to St. Kizito in Bethany. 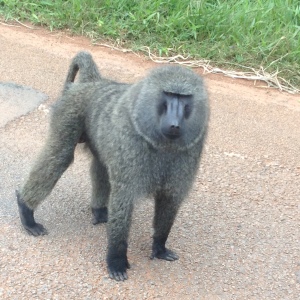 Today we drove back to St. Kizito. On the way out of the park we saw eight more elephants.  We also ran across some baboons that stopped us in the road for a few minutes, but after that brief engagement it was another grueling nine hours until we were back on the St. Kizito campus. The last two or three hours were particularly uncomfortable for me. My arm hurt. My legs didn’t quite fit. My back ached. I felt miserable while realizing that since I sat in the front of the bus, I had more room than most. The infrastructure in Uganda is interesting – mostly it is dirt roads, but there is one major thoroughfare between urban centers. There is rarely a posted speed limit; speed is controlled primarily by speed bumps. Sometimes those speed bumps come as one large mound to traverse, other times four to six little bumps are in the way. In any case, it seems that the speed bumps are spread out just far enough for uncomfortable passengers to start finding a way to doze off only to be jarred awake again… 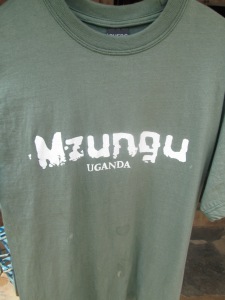 Mityana was amazing at night. The motorcycles (boda boda) darted every which way. Lanes were created for vehicles that appeared to have no room to proceed. Yet we managed. Richard, our driver was wonderful. When people would pass by us or see us in our bus they were cheerful and would wave. The children shouted, “mzungu, mzungu, mzungu!”  That cheer never gets old – even when the ride in the bus has long lost its novelty.

We came back to our dining area at St. Kizito’s to a nice chicken meal and drinks that were waiting for us. A bottle was set close to the edge of the table. As someone was talking and backed into the table, the bottle fell from the edge. 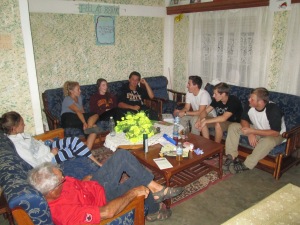 Instinctively, I grabbed for it (but with my bad arm). As I clutched the falling bottle I felt two things: a sharp pain from my fingers to my shoulder, followed by sweet, sweet relief. My self-diagnosis of my arm is that somehow I had popped my elbow both out and now back into joint. The muscles are still a little sore but my arm feels lie I’ve regained its full range of motion.

Driving might be hell, but tonight I’m going to sleep well. It was worth it. I think I’m going to be OK. Thanks be to God.